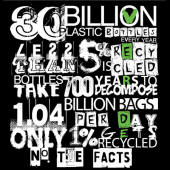 These days, most of us are sensitive to environmental issues. I know I am. I’m not saying I bike to work or anything like that, but I try to recycle, I’ve been known to let it mellow when it’s yellow, and every once in a while I think, for just a second, about going Full Begley.

The problem with my environmentalism is that it lacks the in-your-face punch of badass anti-whalers. I can walk the walk, but I don’t really talk the talk.

So I don’t want to be confrontational, but I’m also kind of afraid of making the old native-american man cry. I’ve found the solution, my friends. Broadcast your hatred of water bottles with No. The Facts. Throw it on, and people know where you stand. Except not in a confrontational way. Because sometimes that’s just not cool.