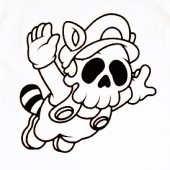 There was something about Mario that always sat a little strange with me. I mean don’t get me wrong, when you look at the story, he’s got a real epic hero vibe about him. But there’s always been a disconnect between the Mario on screen and the Mario that lives in my head, who is usually doing things like walking barefoot over broken glass and telling Koopa Yippie-Ki-Yay. I think it’s the outfits.

I mean, you’ve got Mario who is storming through Koopa’s place just destroying everything he can – stealing gold coins, stomping henchmen left and right, and basically just shredding through Koopa’s nepotistic regime, and what’s the best he can do? Raccoon suits? Different colored overalls? Cute little sock-boot thing? Let’s be clear, the  three embodying powers there are flight, hurling fire from his bare hands, and jumping crazy high. That’s the best they can do? He looks like a child that rummaged through a costume closet.

Not any more. Koopa probably peed himself laughing when Mario showed up in that cap with wings. He’ll pee himself in fear when Mario shows up in Berserker mode. After years of (let’s be real) ridiculous outfits, Mario is stepping up his game.

When skull Mario rams his size-7 workboots down Koopa’s noisemaker, you better believe his princess won’t be in another castle.