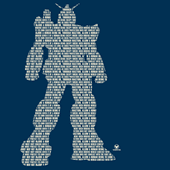 Obviously, most Transformers know as much about the Three Laws as Michael Bay knows about directing movies. That is to say, nothing at all.

However, Optimus Prime would probably dig the Three Laws:

I believe the slanted antennas make this a Gundam and not Optimus, but the details are close enough. As long as no one thinks you’re wearing a Wheelie shirt you should be okay.

If you think Michael Bay is a great film director, please explain below. Understand I may be forced to block you from the site forever for having horrible taste in movies.