What Killed The Dinosaurs 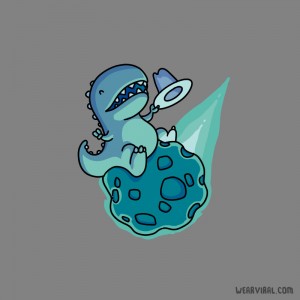 Sit back for a moment and consider a world in which the demise of the dinosaurs came at their own hands. Imagine the meteor that fell out of the sky was actually sent into the sky by an intelligent species of dinosaur that was willing to destroy everyone for his own gain. That’s right, I’m saying the alligators, sole survivors of that apocalyptic event, were responsible for the death of millions, possibly billions of their kinsmen. Now, I know that’s not what this T-shirt depicts and I know it’s not even what it’s referencing. I love Dr. Strangelove as much as the next guy. But I’ve never trusted alligators. And I never will. I’ll never forgive them. For the death of my boy*.

*Disclaimer: I do not have and have not had a son that any alligators could have killed.