Tee Of The Week: God Save Stan Lee 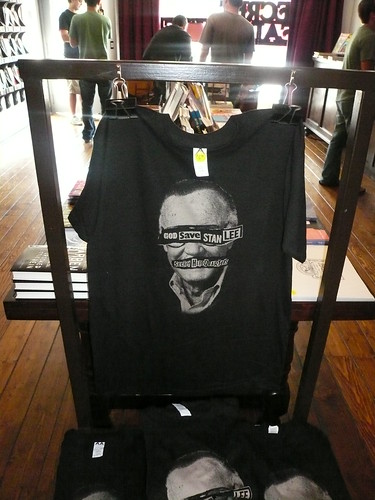 So I inadvertently ran into Cory at Seven Grand a couple weeks ago and he was rocking this extremely kickass tee from Secret Headquarters, one of the best comic shops in all of Los Angeles.

For those of you not hip to comic book nerddom, this is a mash up of the classic Sex Pistols’ “God Save The Queen” single artwork — which has adorned countless t-shirts — and Stan Lee, a god amongst men. As far as I’m concerned, it’s a pretty apt tribute to one of the people who helped shaped my adolescent years. Now mind you, I wasn’t old enough to grow up during Stan’s golden era — but I did read all of the Spider-Man and X-Men titles pretty religiously when I was in my early teens.

Right now it looks like the shirts are only available in their store, but hopefully they’ll get them for sale online shortly. If they do, I’ll be sure to link it up here if nothing else. Until then tho, you’re going to have to make the trek to LA in order to score one. Sorry kids!